Mangersta bothy on the Isle Of Lewis 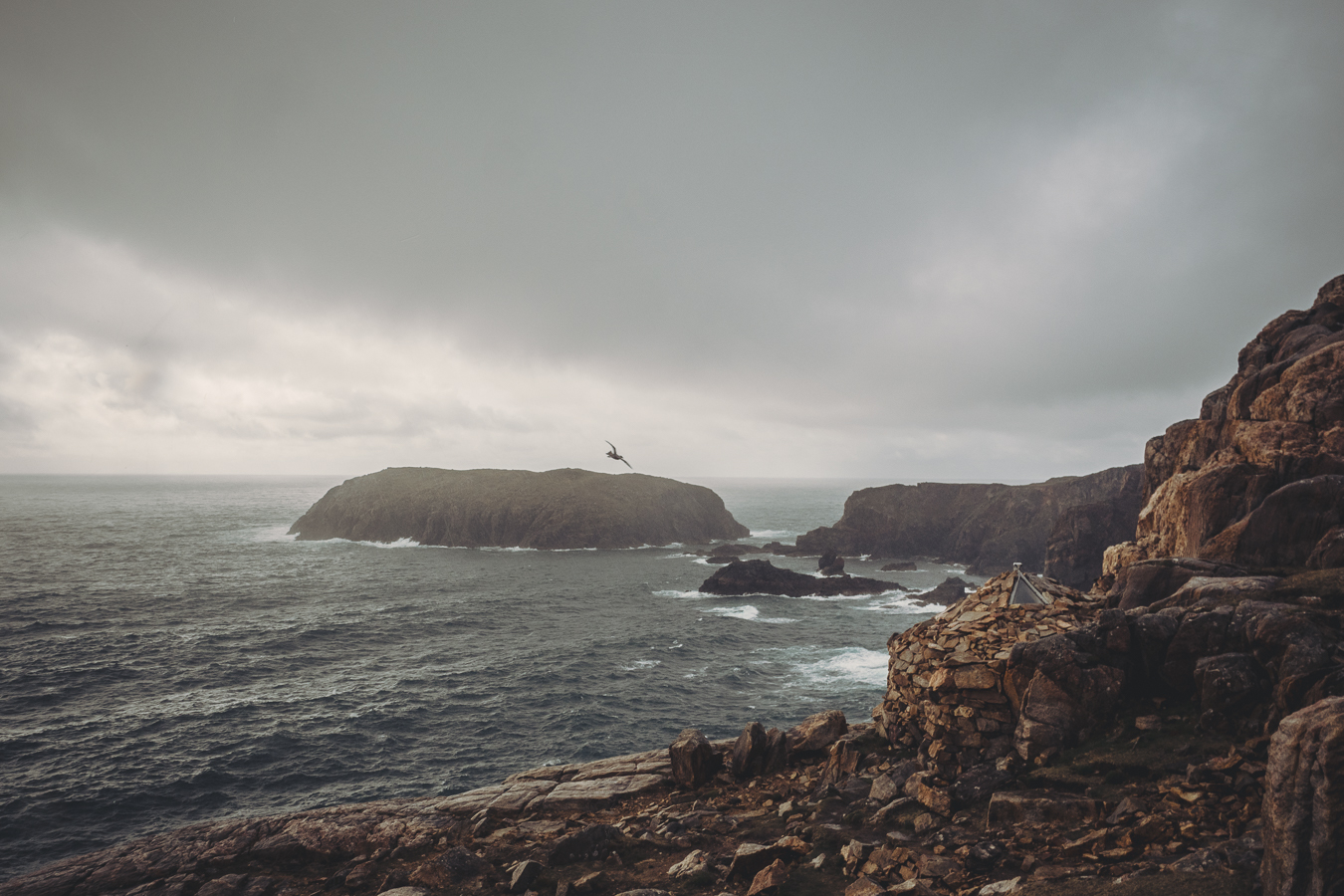 If like myself you have a fondness for bothies, there is a fair chance you may have heard of the secluded shelter hugging the cliff tops near Mangersta.

With social media posts, stories, videos and even dare I say it… good old school talk, its hard not to get excited about this particular bothy. Pretty much all bothies regardless of appearance or location get my outdoor mojo doing summersaults but this little gem has been high up on my visiting list for quite some time. There is one small issue though, it’s at the end of a one way road, on the Isle of Lewis in the Outer Hebrides. 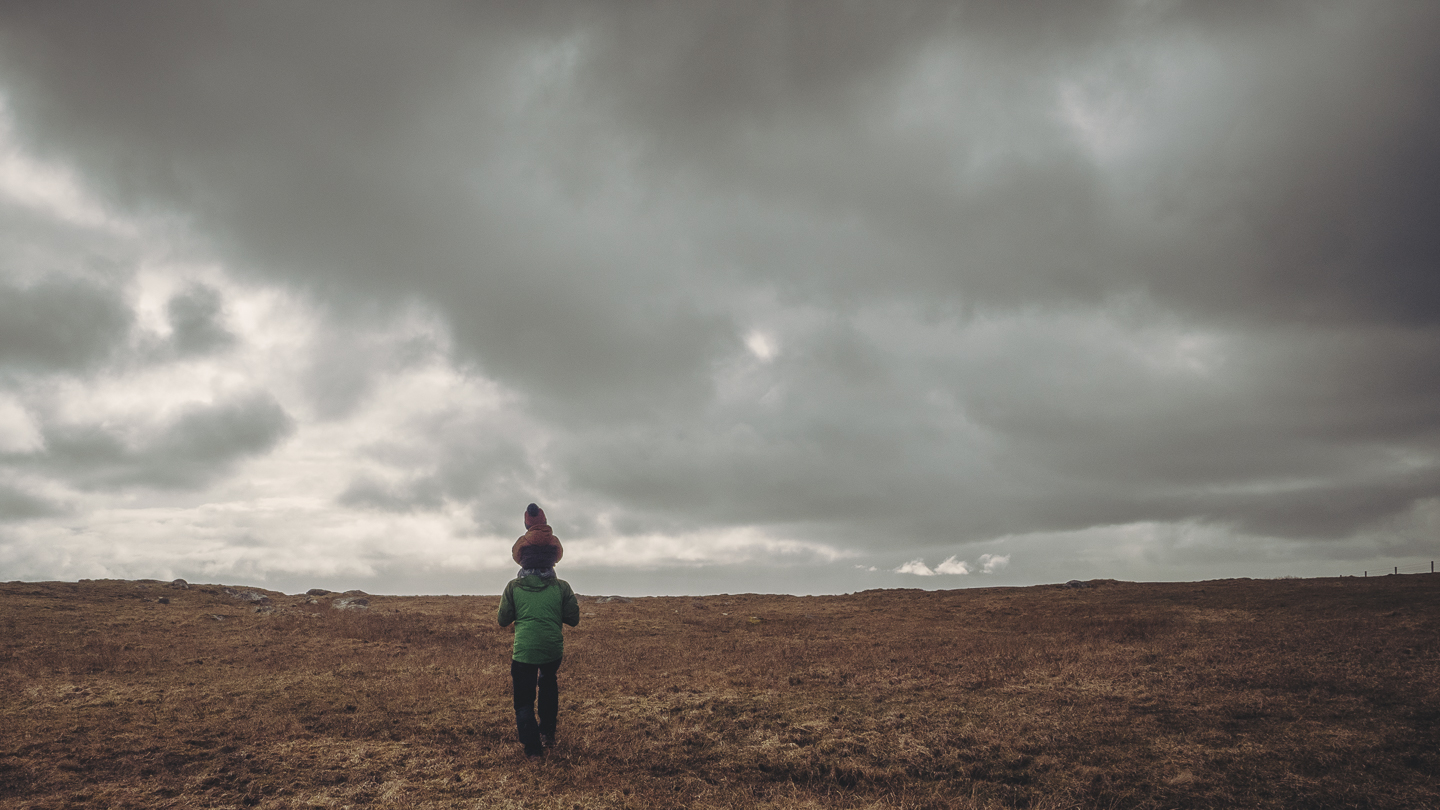 Walking towards the hidden bothy.

This visit wasn’t a bikepacking or hiking adventure but something a little more special, I was going in search of this iconic bolt hole with my family. Harri has now reached the mini explorers age of two and is already walking for miles unaided, yet he seems to take great joy in walking or running in the complete opposite direction to the one your heading for. As frustrating as this can be at times the fact that his little face lights up as soon as he steps outdoors makes my heart pound with joy. 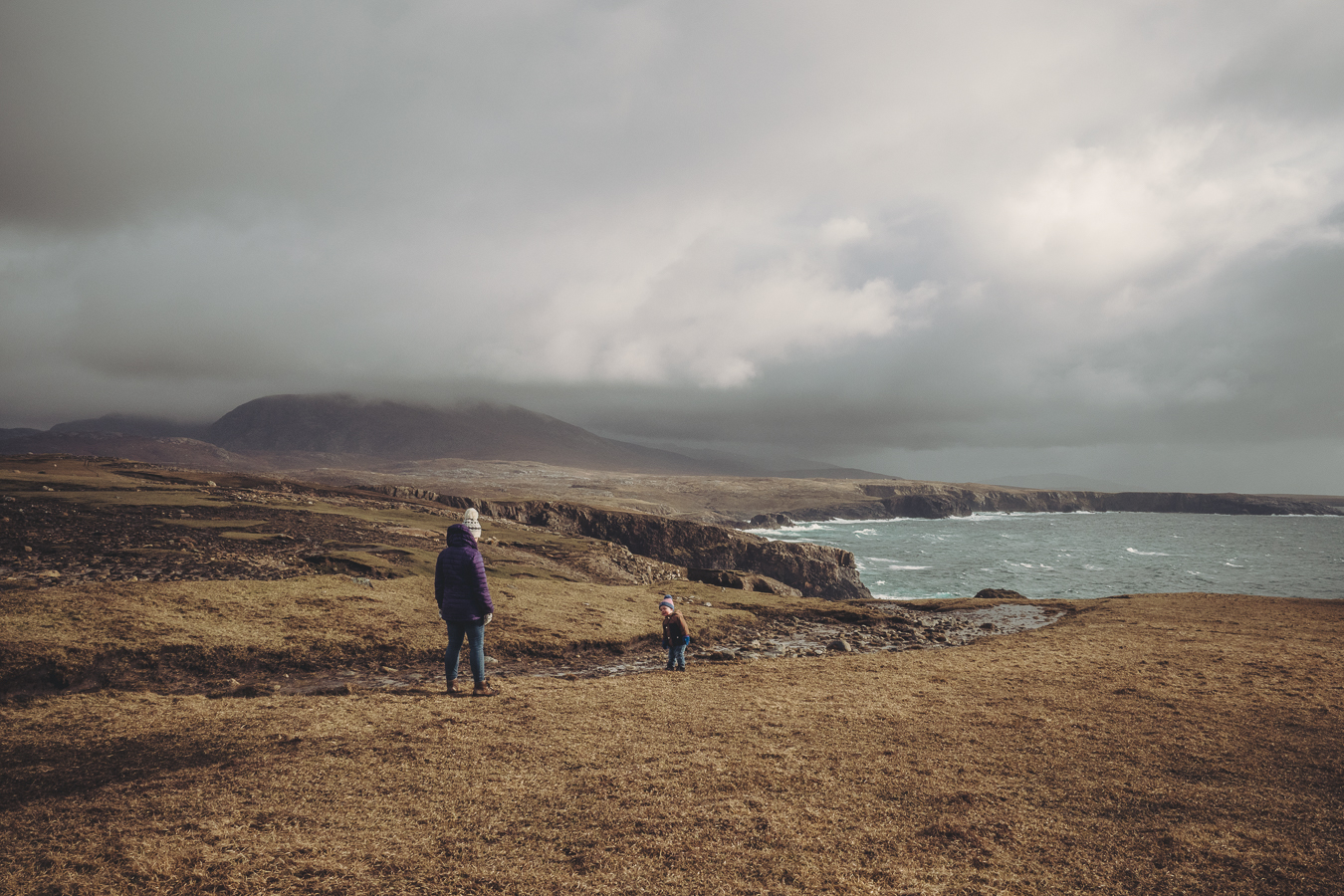 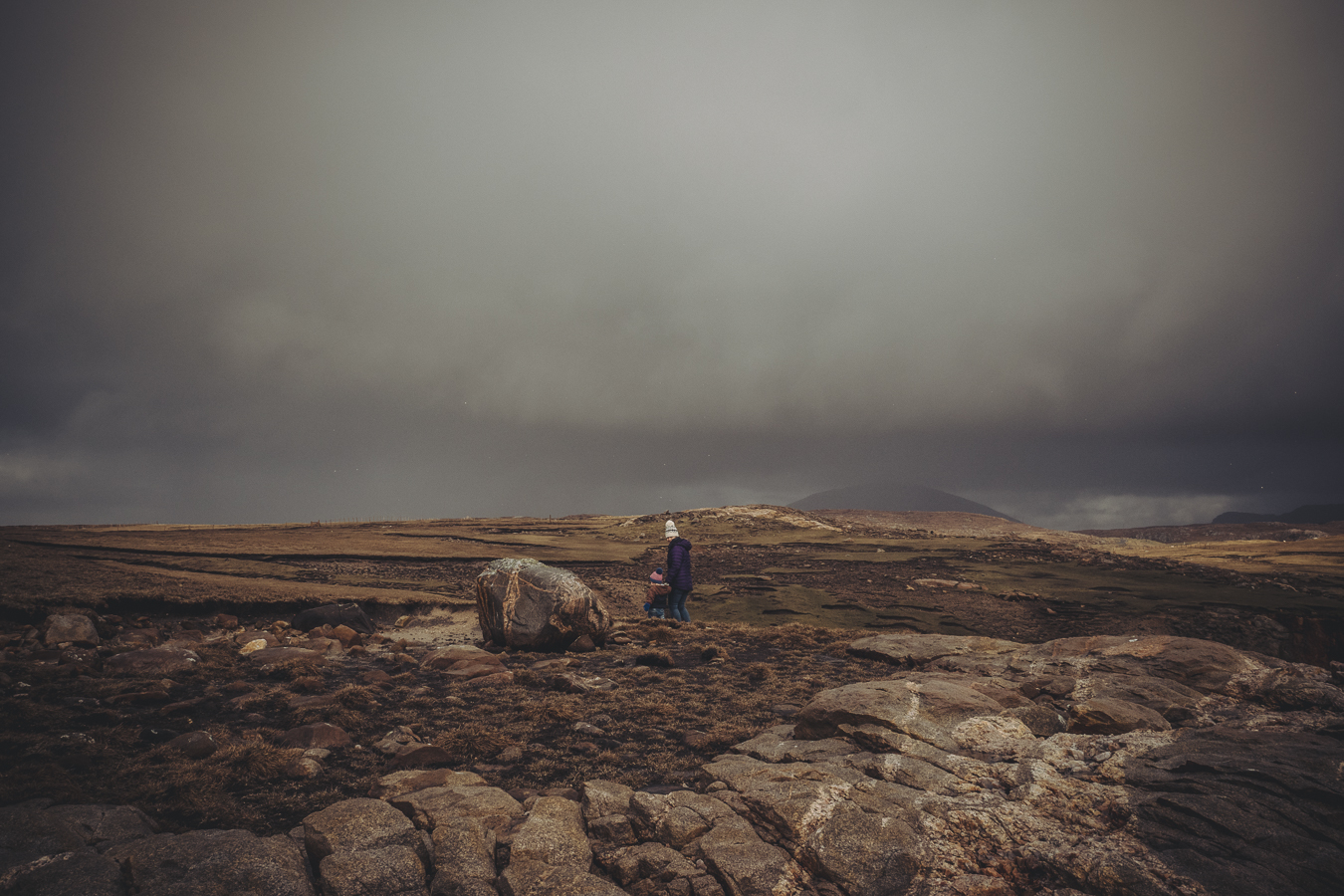 After watching a Youtube video made by the creators of the Mangersta bothy I found out roughly what direction we needed to head. Normally I wouldn’t worry about things like this but one thing I have come to learn about this island is if you don’t have a firm direction when travelling across its imposing landscape, you can soon end up surrounded by what seems like an endless peat bog that unfolds as far as the eye can see.

With the tiny stile located and negotiated we wandered in a disorderly fashion towards the coastal cliffs. In true Lewis style the winds picked up and brought with them a light drizzle that was enough for me to know what my wife next words would be. I explained as us men do that it wouldn’t be far and once there we could shelter from the incoming weather in the comfort of a hand built stone 4 star hotel.

Luckily a few minutes later and with Harri now on my shoulders we came across a gate with a wooden arrow pointing towards the cliff edge. That was a good enough sign of reassurance for me and within 10 minutes and a little running around I spotted the iconic stone roof and window. With the weather now beating us down we bolted for the door and snuck in to shelter from the Atlantic winds. 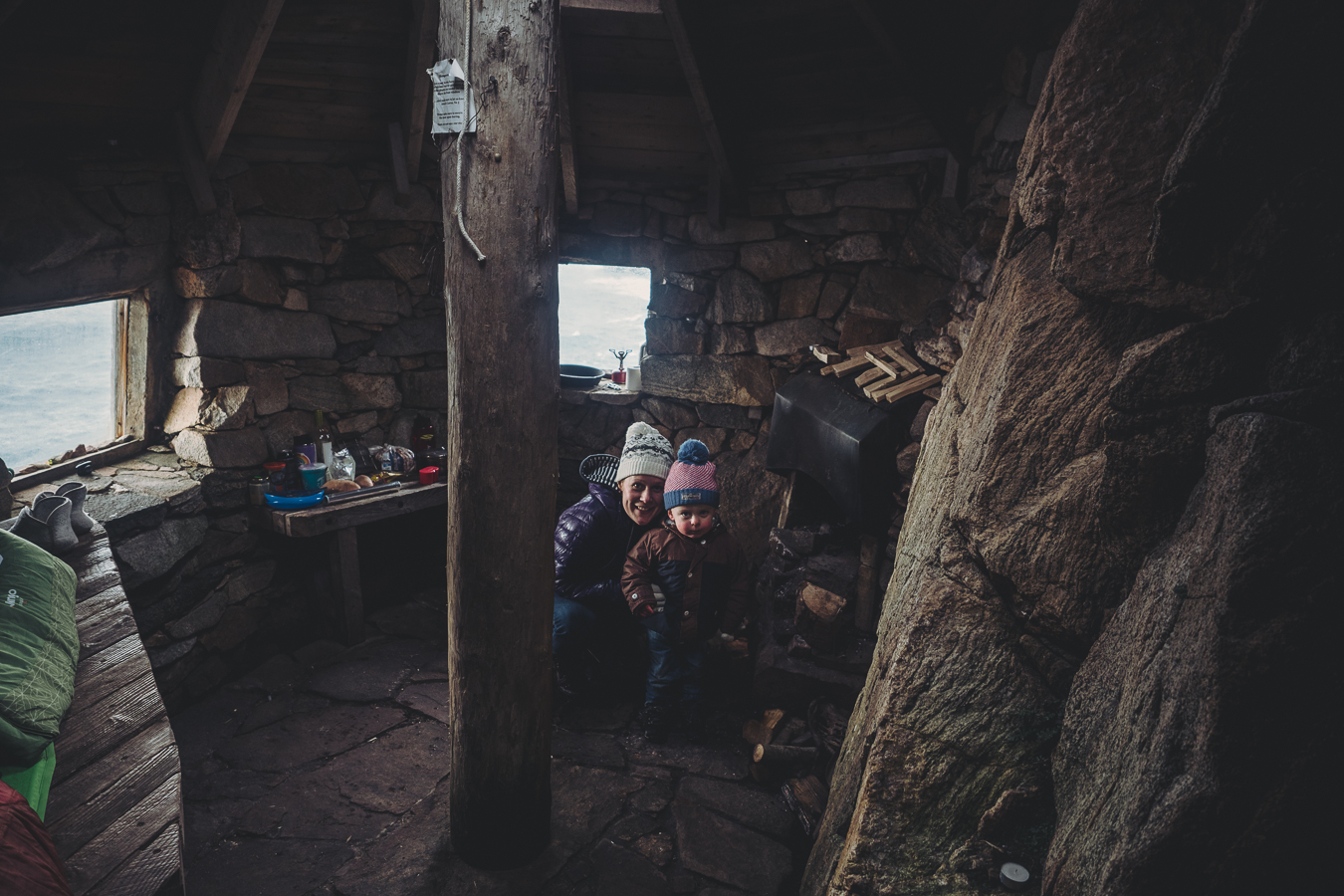 Inside and away from the beating winds and rain

Once the uniquely shaped door was shut behind us, we were struck by the calmness this little shelter offers from the rough coastal weather. My eyes were instantly drawn to the two little windows that help frame the wilderness that lay beyond them. Looking out towards the crashing waves and listening to the muted sound of the incoming rain hitting the glass, I instantly wished we were staying for the night. I felt like I could sit at one of those windows with a warm drink in hand and watch the world pass by for hours.

One thing every bothy needs is a heat source to help warm the extremities and often to dry clothes, thankfully there is a lovely little stove built neatly into the corner. With little to no wood available its worth noting you will need to carry in your own fuel, it wont take you long to realise the island has a severe lack of trees. Many places will sell kindling, coal, peat, logs etc so its easy enough to acquire something to burn with the handing over of your hard earned cash. 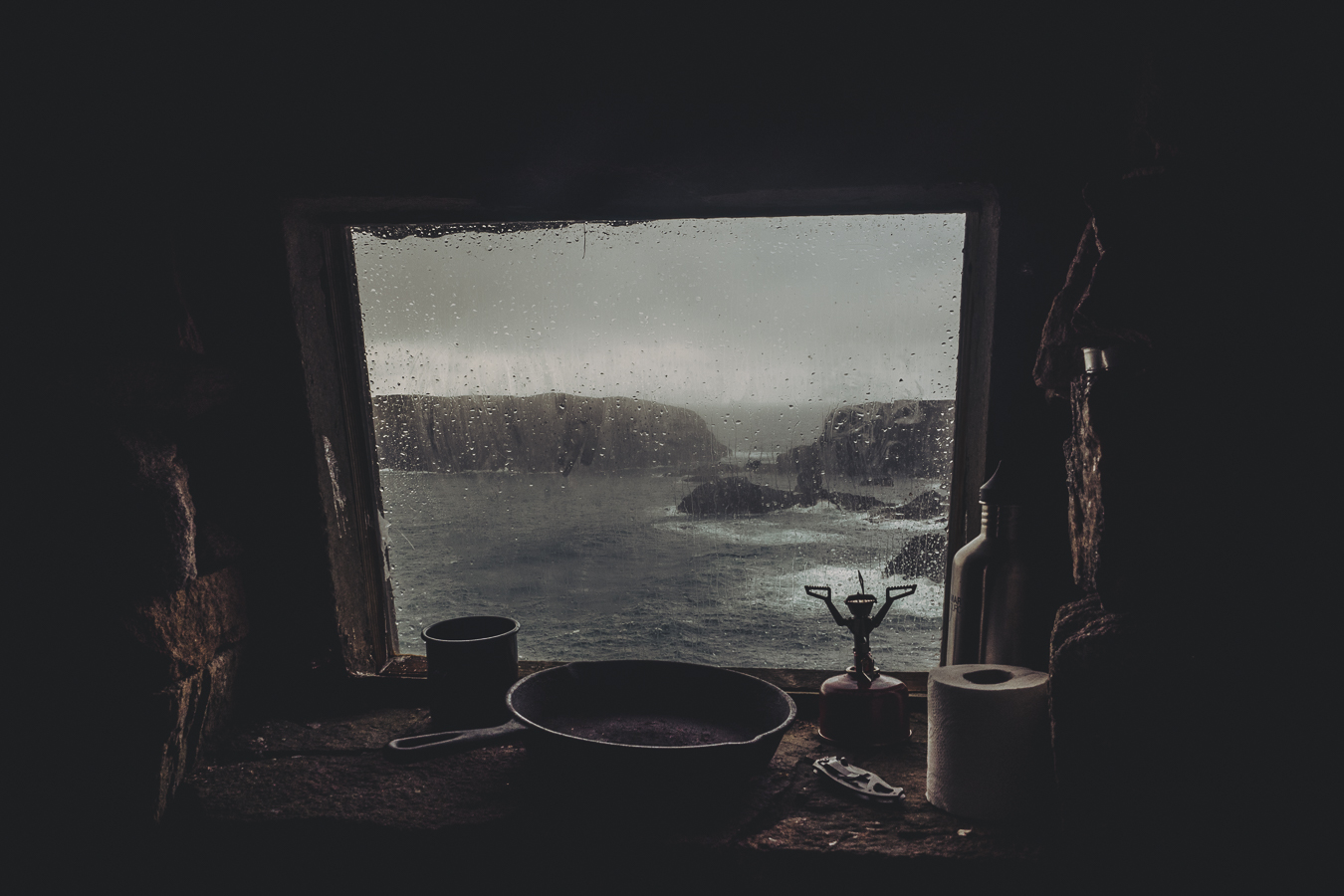 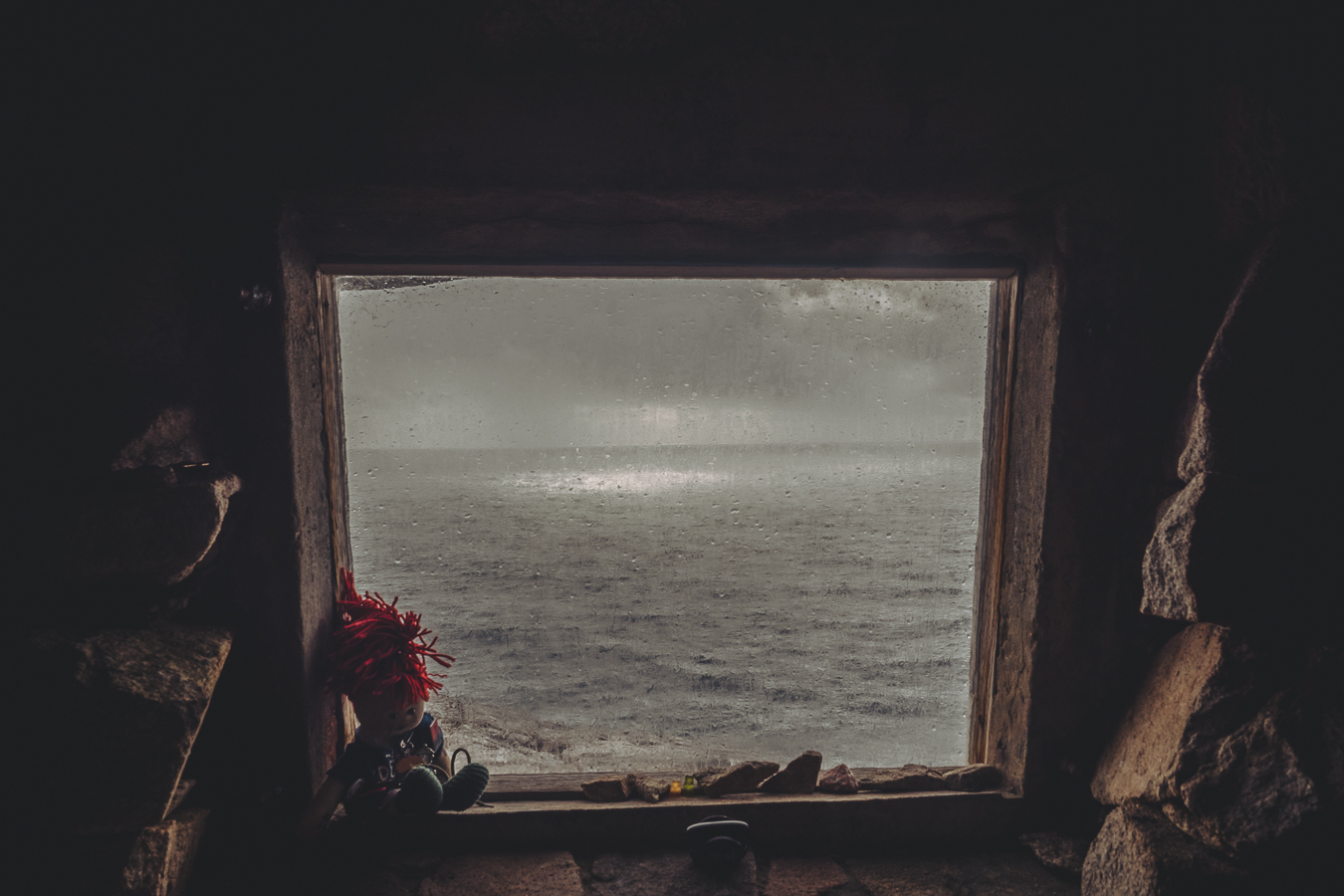 Its worth noting that although there is a sleeping platform, its rather small and if two are planning to sleep on it I would recommend that you are both pretty happy to be within close proximity of each other. The floor area would take two but make sure you bring mats as its an uneven and probably rather cold floor. I would say you could sleep three inside but any more would be a tight squeeze.

We have said as a family we will come back and I really can’t wait, watch this space for another blog. One that will include images of a sunset, sunrise and three very happy faces 🙂

Mangersta Bothy… We will see you soon.